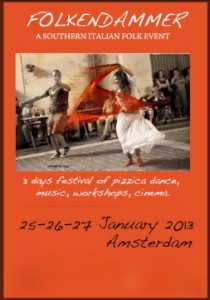 Folkendammer is a 3-day festival of traditional Italian music & dance, held in the Netherlands, 3 times per year, under the artistic direction of Isabella Ruggiero.

Second edition on the 3, 4, 5 May 2013, in Amsterdam and Utrecht, hosted Traballo featuring dance Chiara Ciacchella and their repertoire of traditional dance ( Il Saltarello ) and music from region Le Marche.

The joy and the fun of Traballo featuring Chiara Ciacchella

The elegance and the experience of Duo Taberna