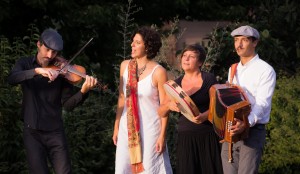 Danzeasud in collaboration with Drumtune present a very inspiring ensemble from Italy that combines traditional italian songs with a southern American touch.

Free entrance
For the diner reserve via http://depeper.org/

The acoustic quartet PizziCanto was founded in 2007 under the artistic direction of Chilean musician Gabriel Aguilera Valdebenito with the intent to explore the possible coexistence and mutual contamination between traditional repertoires of Southern Italy and South America.

The catchy rhythms and the constant references to different genres and cultures, make PizziCanto versatile and suitable for both concert performances, folk festivals and in particular, to the accompaniment of folk dances.

Diatonic accordion player and composer, studied with the top professionals in Italy(T. Winky, R. Tesi, R. Tombesi). He performs concerts in Italy and abroad and has to its credit recordings with artists of different styles (including V. Buzzi, ‘The City’ dei Papi “, 2001; G. Garzone & M. Mainieri,” Leucasia “, 2006; Ammaraciccappa, “Al Qantarah,” 2007; Duo Rocca-Benigni, “st”, 2008; Gabriel Aguilera, “de Corazon a Corazon”, 2010; Dario Muci, “Sulu”, 2010; Teresa de Sio, “All changes, “2011; Luigi” Greeks “De Gregori” Angels & Ghosts “, 2012). Author of songs ranging from jazz to ethnic music, is the founder of ‘”Aguilera Project” with guitarist and luthier Chilean Gabriel Aguilera, and plays regularly with the ensemble “Pizzicanto”, in duo with clarinetist Paul Fortress, with the band of Teresa de Sio, with Moni Ovadia and with Lucilla Galeazzi. He composed the music in 2008 for “Pinocchio” by S. Greaves and “Love”, a show of Emanuela Giordano and Susanna Tamaro starred with Mascia Musy, with replicas in theaters all over Italy. Currently he teaches accordion in Lazio and Abruzzo, his homeland, and seminars in collaboration with IALS and CEMEA.

Actress and singer.
He began studying music and polyphonic singing at the high school. In 2003 he started the study of voice and music of oral tradition popular Italian with Lucilla Galeazzi. Parallel to music develops a research in which integrates the experience of singing, expanding the expressive potential of the voice.
In 2006, together with Antonio and Massimo Lanera Romanazzi founded the theater company UnAmletoditroppo.
She works as an actress and singer with various companies and in various bands. Since 2008 he participated as a musician in a project of Ludoterapia in hospital pediatric working with the non-profit organization in Salt Pumpkin. Since 2012, follows a course of training as a music therapist.
He has collaborated with Andrea Polinelli, Odila Presulmé, OThiasos; Koine, Theatre Viola, Valdoca Theatre, Theatre of the Wind and the international network of artists and musicians X Project. Among the musical projects in which he took part: Relevant Facta Memorabilia Ensemble, The ‘Ntisa Paving, Terna Voice, The Voices Golden, Pizzicanto.

Fabio Porroni
Multi-instrumentalist musician, he worked as an actor, trainer, technician, assistant director and producer of live music to the CUT (Central University Theatre) of Viterbo. Collaborate in the arrangements for the soundtracks of shows for Tuscania D’Arte, with Francis Kuipers for Abel Ferrara’s film.
In 2006 he founded the project “Minimum Orchestra Mysticanza”, still active in the country with concerts, theater performances and concerts / educational conferences; with the O.M.M. music 11 short films by Georges Méliès presented live in “cinematography of Méliès.” Since 2007 he is part of the Ensemble acoustic PizziCanto. In both projects, carries out research in the field of popular music. Alongside an intense and multi-faceted concert that teaching through theater workshops / musical and educational shows aimed at children of elementary and middle schools in the provinces of Rome and of the ‘Alto Lazio.