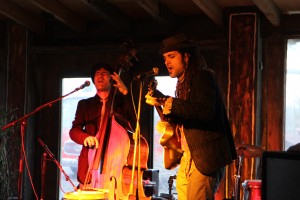 food tasting in between

The original songwriting of the BABBOO varies from Gipsy Manouche to French Musette, from Pop ballads to African Rhythms, from popular Cumbia to intellectual Samba and Cuban Son. Their show can be described as a danceable poetry, very energetic and elegantly rough, moving and touching at the same time.
In the BABBOO performance the audience is bewitched by the strength and the intensity of Ale’s voice, as by the delicacy of some mellow melodies, which create a good balance between the sexiest roughness of latin rhythms and the coolest songwriter’s pop.
But… A songwriter who sings on his Double Bass ??? possible, when Alessandro becomes a BABBOO… What’s a BABBOO? BABBOO is the only human-resembling primate which comes from the future. A further step for humanity (better? worse? who knows… surely more musical!), busy with songs and serenades, carried on with irreverent grace of certain popular music and the rigorous freedom of jazz.

From the streets to the stages, everyone is kindly entertained and refreshed by this original, powerful and inspiring music, whose lyrics are written in English, Portuguese, Spanish and Italian.

From the solo theater pièce Alessandro took the inspiration to form the BABBOO band: thus his strong guitar and versatile voice met a powerful quartet of musicians, who experienced stages of any kind with names like Amarins & le gatte negre, Zorita, Trikosis, Forgotten Fish Memory Orchestra, Mind Shelter and Wie Walvis Theater Company. From the open magic of European streets to the rigorous preparation of the stage, until the delicate subtlety of children shows, these musicians have been able to cheer up and charm the most diverse audiences! They’ve been Hot and Spicy!

The Quintet achieved important goals like the Desmet Studio videos and gigs at big venues of the Netherlands and Belgium (Vera Groningen, Landjuweel and Magneet Amsterdam, Mano Mundo, Bruxelles, etc…)

A second chapter opened when, after the intense experience of the Quintet Ale met Luca “Luks” Russo, guitar player, composer and arranger, who helped to rearrange the old repertoire, pushing Ale to rewrite the songs on Double Bass. With the intense and lyrical flavour of Luks on guitar and his precious help, a second phase of the band is definitely opening, available also in Trio with Percussion (with Vincenzo Castellana) or Quartet (with Teun Van Langen).

Versatile musician for stage, street and theater, playing double bass in various formation between Italy and Netherlands (Amarins & le gatte negre, Forgotten Fish Memory Orchestra, Trikosis, Rosichino) and performing his songwriter repertoire on guitar and voice as Alessandro Seul. In 2012 Ale Seul writes the solo music-theater pièce °Babboo Theater°, in which he performs and acts his songs in the role of his inner animal / alter ego, the Babboo. BABBOO will further become the name of his band in 2013.
After this experience Ale feels ready to rewrite all his repertoire for double bass and voice, helped by the precious funk/jazzy taste of Luca “Luks” Russo

Luca “Luks” Russo
Studied in Turin classical music and jazz guitar, acquiring a deep knowledge of contemporary languages and maturing experiences in different areas of jazz, from the songwriter world (Cuori in Barrique) to the latin (Brincando de Bossa), through the funk (TGFB trio) and the folkish background (Vincent Bombetta). Luks produces music for Accademia dello Spettacolo’s musicals (2006/07).
After many festivals and tournèes (“Monforte Jazz Festival”) and important event for TV broadcasting (European Rai Sat live 2007 in Piazza Castello, Turin, with the rumanian singer Victor Socaciu), in 2008 Luks enters the most important step in his music career, the “space folk” band TALUNA, in which many languages are mixed by a conjunto which is touring in some of the most important stages worldwide (Womax and SXSW).
In 2013 he moves to Amsterdam.

La Tammurriata is a Southern Italian traditional dance workshop by Isabella Ruggiero, certified advanced dancer and choregrapher, held once every two month, at OT301 in Amsterdam, within the event Cinemapasta, and every last monday of the month in CC Muziekcafe’ in Amsterdam.

Isabella Ruggiero, experienced dancer and choreographer, introduce the participants to the cultural background of Tammurriata – a combined form of music, sung and dance – as well as to the basic techniques of dancing and drumming.

The workshop is structured in two parts:
Day 1 – dance technique, dance etiquette, practical skills and theoretical knowledge on the rhythm of the drum Tammorra, lyrics, verses, rhymes, jokes and the conventional expressions and the metrical structure of the ‘canto’.
Day 2 – Styles: It will be examined the styles (Giuglianese, Sarnese, dell’Avvocata, dei Monti Lattari, Montemaranese ) from different geographical areas of region Campania, south of Italy.

La Tammuriata is a music tradition lived in the rural areas around the volcano Vesuvius, in the South of Italy. Throughout the transformation of seasons, the tradition connects the existentiality of the local population with their everyday social lives and work, the earth and the elements of nature, and with their ancestors and spirituality. With utter devotion and care, la Tammuriata has been passed on as a strictly oral tradition over many generations. It exists today an intriguing tradition transcending the limits of everyday space and time in a powerful ritual to cleanse up the social and metaphysical tensions that obstruct the eternal progression and repetition of life’s cycles.

Isabella Ruggiero (Napoli, Italy) is dancer, researcher and choreographer of traditional dances from the South of Italy, Egypt and the Middle East. Isabella is based in Amsterdam, the Netherlands, and organizes traditional music & dance events and artistic residencies with the aim of creating a bridge between Mediterranean and other local cultures to spread music and dance culture abroad.

Mediterranean folk ensembles is a music & dance evening dedicated completely to southern Italian and north African sounds. Under the artistic direction of Isabella Ruggiero, every last monday of the month in CC Muziekcafe’ in Amsterdam, Danzeasud in collaboration with Muziekcafe’ will be presenting gigs of Mediterranean music and dance.

Danzeasud is an exciting project by Isabella Ruggiero. She is certified dancer, trainer, researcher and choreographer of Southern Italian traditional dances as well as Oriental Egyptian & Middle Eastern dances. She is an Italian based in Amsterdam, Holland.
Danzeasud events consist of Italian traditional music and dance with the aim of creating a bridge between Mediterranean and local culture. Danzeasud also engages in artistic residencies.