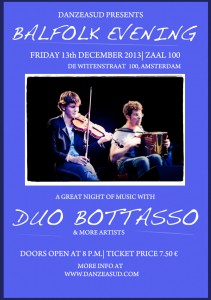 Because it takes place in a small room, it is advisable to reserve it. This can be done via the form on www.balfolk.nl or via www.danzeasud.com

The brothers Bottasso, Nicolo on violin and Simon on the diatonic accordion, offer a show of traditional ball music, full of emotions and improvisations. Reinterpreting music belonging to the folk tradition, or new compositions by folk musicians, the duo is always looking for a compromise between the intimate delicacy and the great youthful energy that connotes the two musicians: all this combined with the fraternal complicity bound by the same passions and the desire to communicate emotions through their music.
The duo has participated in important traditional music festivals, including the Festival of Monte Carlo Printemps des Arts (2012), Festival International de Maitres et Luthieres Sonneurs of Saint Chartier (2009), Festival Damada (2007) and actively participates in quality of teachers and directors of the project orchestral ensemble called Folkestra Bricherasio.

SIMONE Bottasso began playing the accordion at the age of eight years under the leadership of Silvio Peron with which explores the repertoire of traditional Occitan and French music. Thanks to copious workshops and master classes with some of the biggest international accordionist (Marc Perrone , Joseba Tapia , Riccardo Tesi and finally Norbert Pignol and Stephane Milleret ) adopts innovative instrumental techniques on the instrument, including jazz improvisation .
At the same time, he graduated in flute at the conservatory Verdi in Turin. In February 2013, he graduated in Jazz at the Giuseppe Verdi Conservatory in Turin with a thesis entitled “The bridges between world music and jazz ,” which contains a chapter on the experience of conducting and composing with the “Folkestra Bricherasio” .
He collaborates with groups ” Stygiens “, ” Abnoba “, ” Triotonico “, ” Tradalp ” and ” Duo Bottasso ” and is host to numerous international festivals including the ” Printemps des Arts” in Monte Carlo, the “Festival International de Maitres Luthiers et sonneurs ” Saint Chartier in France, Turin Winter Olympics 2006 Terra Madre (2010), Turin and MITO Settembre Musica , European Jazz Expo , Cagliari, Folkest , Interceltic Festival de Lorient, Quimper Festival de Cournouaille , Acoustic Paths of Pistoia ” Trad It” in the Netherlands, Torino Jazz Festival. In 2010, with Abnoba collaborates with Paolo Fresu and the Alborada Quartet .

FOLKESTRA&FOLKORO took shape in 2009 as the development of a training project of traditional music, under the direction of the accordionist and flautist Simon Bottasso , assisted by violinist Nicolo Bottasso . The warp on which is woven the project Folkestra and passion for traditional music , which has been revisited and enriched by an innovative orchestral dress : the varied repertoire includes songs from the traditional music of the Piedmont and Occitan Valleys , melodies of the French musical culture and compositions of the musicians of the orchestra. The orchestra is composed by talented and young musicians, some of them professionals playing a wide range of instruments linked closely to the world of folk music, such as hurdy-gurdy , accordions , bagpipes , strings , mandolin, and other more contemporary , including flutes, saxophones , clarinets , drums, guitar and bass. The orchestra has performed at the Festival in 2011 “Gran Bal Trad” and “Cinema vekkio” in Corneliano d’Alba . In 2012, the Folkestra has performed numerous concerts , including the collaboration with the band Noisy Boves, a concert at the Maison Musique in Rivoli and the exhibition ” 2012 Nights Folkestra ”. The director Piero Cannizzaro has placed the group in the documentary ” Tradinnovazione : a music glocal ” research into contamination of traditional music , broadcast on RAI 3 in the program “MagazziniEinstein”. Since 2012 the Folkestra is involved in organizing a series of concerts , Folkestra Nights 2012, which hosted in Bricherasio some of the most famous musicians of the European folk scene , including Naragonia , Andy Cutting , Accordzeam , Numico and Peter Vincent Boniface of the Abnoba group , who have shared the stage with the orchestra and helped to enrich the sound of the band . Folkestra in April 2012 was host of the European project ENFO (European Network of Folk Orchestras ) in Vigo (Spain) for a series of concerts together with the most important orchestras in the European folk : Tradalp , Sondeseu and folk orchestra of the Sibelius Academy in Helsinki .